“In a Culture Show special, Oscar winning director Danny Boyle talks to Mark Kermode about his new film Trance, London 2012’s afterglow and the highs and lows of an extraordinary film-making career.”

Danny Boyle began his career in subversive agit-prop theatre at the Royal Court and went on to be equally subversive in TV.

Breaking into feature films, his back catalogue includes the violent, kinetic, anarchic as well as touching, satirical, philosophical and romantic. From iconic counter-culture Trainspotting, frenetic horror 28 Days Later, to eight-Oscar triumph, the brutal romance Slumdog Millionaire, Boyle is at his best when he refuses to compromise. It was something he acknowledged in less successful projects – Hollywood excesses A Life Less Ordinary and The Beach. END_OF_DOCUMENT_TOKEN_TO_BE_REPLACED

It is a film about a vibrant city continually renewing itself, mixing film archive material and popular music with the voices of Londoners past and present; musicians, writers, artists, political radicals and ordinary people. ‘London Babylon’ is a relentless, sprawling collage, starting with a raid on BFI archives, from the earliest moving picture footage of the late Victorian era through to present day. END_OF_DOCUMENT_TOKEN_TO_BE_REPLACED

Exit Through the Gift Shop 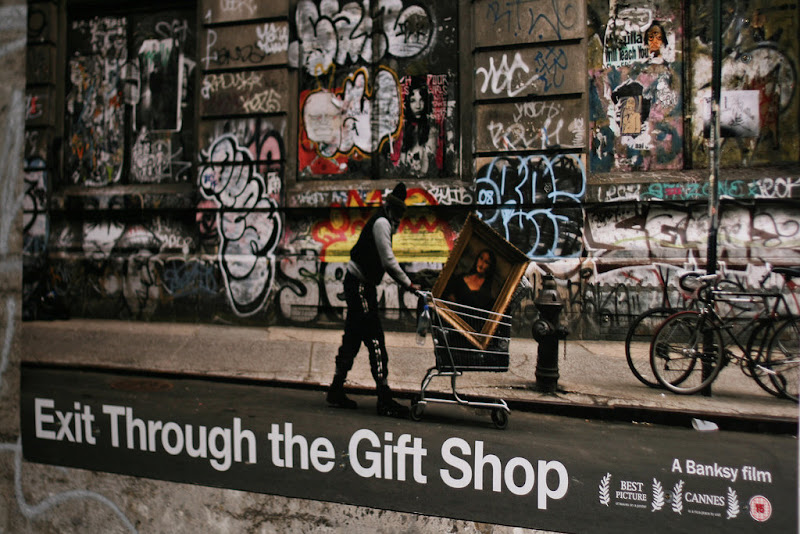 There’s a 1966 Peter Sellars movie, After the Fox, in which Sellars’ master criminal Aldo Vanucci (aka the Fox), posing as a famous director, persuades the entire population of a  coastal village that they are the stars of his latest art-house movie, the cover story for smuggling the “gold of Cairo” abroad.

Exit Through the Gift Shop is a documentary centred on the apparent friendship between British street artist ‘Banksy’ and obsessive super-fan Thierry Guetta, an LA-based Frenchman with a lucrative ‘retro’ clothing business and a compulsion for videoing his life. END_OF_DOCUMENT_TOKEN_TO_BE_REPLACED

Of Time and the City

Posted by Robin Catling on May 12, 2011
Posted in: Culture, Film. Tagged: Documentary, review. Leave a comment

“Of Time and the City is both a love song and a eulogy to Liverpool. It is also a response to memory, reflection and the experience of losing a sense of place as the skyline changes and time takes it toll.”

“Terence Davies returns to his native Liverpool and to his film making roots to capture a sense of the City today and its influences on him growing up in the late 40’s and early 50’s. Liverpool’s phoenix-like rise is portrayed like it’s never been seen before; how a city can change itself and the people under its influence… “

This is the introduction from the official website, Of Time and the City http://www.oftimeandthecity.com/ and positions the film honestly as docu-memoir and political agit-prop. Of course, it’s Terence Davies and it’s beautifully made… END_OF_DOCUMENT_TOKEN_TO_BE_REPLACED