BBC Wordlwide’s Tom Brook looks back at some of the highlights of the 2013 Cannes Film Festival, hearing from the big name stars and major industry players congregating on the French Riviera.

Ex-pat British reporter Tom Brook has covered the film industry for the BBC for the past 30 years, sending back measured, intelligent coverage. Brook has been the face of Talking Movies on BBC World News from the programme’s first broadcast in 1999, presenting every episode of the show since it first began.

I recall seeing him first in 1985 as the US correspondent for the BBC’s top cinema programme in the UK presented by Barry Norman on BBC One.

No explanation necessary, get the best of the good doctors on 5 Live’s ‘Wittertainment’

Former BBC Radio One DJ Mayo and film critic Kermode have successfully built their partnership on Radio Five Live over the last seven years, including several Sony Award nominations and a win along the way.

The pair have a cult following, so that even after 5-Live’s latest blue-collar news and sport makeover and Mayo’s return to Radio Two tea-time show, Five Live has retained them as a flagship culture item on Friday afternoons. END_OF_DOCUMENT_TOKEN_TO_BE_REPLACED 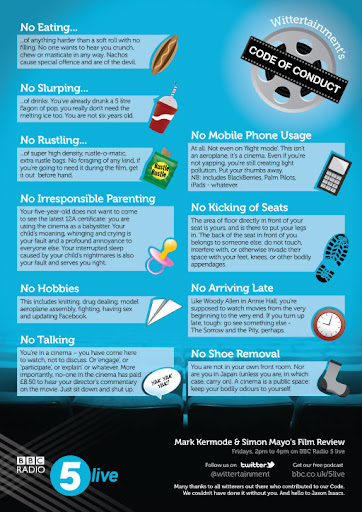 Lifted from our favourite movie review’s show, we present the Simon Mayo and Mark Kermode Cinemagoers Code of Conduct, the ten commandments for cinemagoers.

This should be essential reading for every filmgoer and a mandatory public notice pinned at the entrance to every screen. RC

Available as a hi-res PDF document and as a hi-res graphic poster. END_OF_DOCUMENT_TOKEN_TO_BE_REPLACED