Imperial China, AD 208: a big dollop of Chinese history coming up. Liu Bei flees with 100,000 peasants from tyrannical Prime Minister Cao Cao’s million man army, to take refuge with Sun Quan in the Southern state of Wu, joining with the rebel forces of Sichuan. As Cao Cao’s huge navy sails up-river to invade Souther China, the rebels unite their forces at the Fortress of Red Cliff in the hope of defeating their common enemy.

No one is making epic cinema like the Chinese. The modest (by Hollywood standards) $80 million budget feels several times that with the spectacle that is thrown up on screen for the better part of three hours. This is a Chinese war movie that outdoes all the others in the scale of action (Mulan and Confucius included). END_OF_DOCUMENT_TOKEN_TO_BE_REPLACED 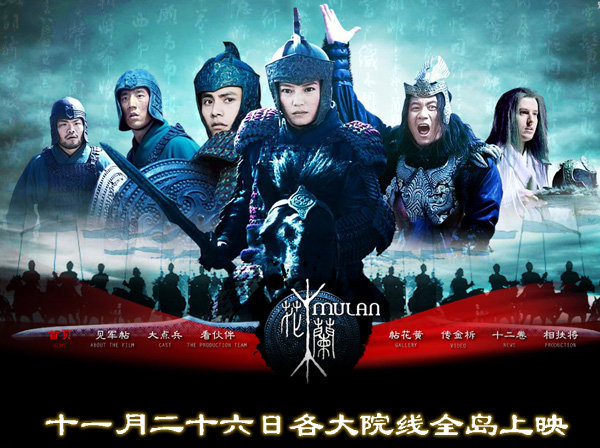 The legendary story of Mulan, the girl who went to war and saved a nation. No, not the Disney musical, but China’s live-action epic recalls El Cid, The Longest Day, A Bridge Too Far and the Sands of Iwo Jima in a sweeping tale of nationalistic pride.

When the Wei nation is threatened by the barbarian raiders of the Rouran tribes, the Wei go to war with a nation-wide draft. Let’s skip over the implausible tale of the enlisted volunteer soldier who is really a girl and keeps her gender concealed throughout the whole campaign and rise to the highest rank.

Nobody does historical epic like the Chinese. Casts of thousands, even before the CGI, sets, costumes, weapons, landscapes; China outdoes the golden age of the Hollywood epic by sheer weight of state resources thrown at the film industry in the world’s most populous country. And in return, the patriotic message of personal sacrifice in the name of Chinese unity and progress weighs down the whole enterprise time after time. END_OF_DOCUMENT_TOKEN_TO_BE_REPLACED