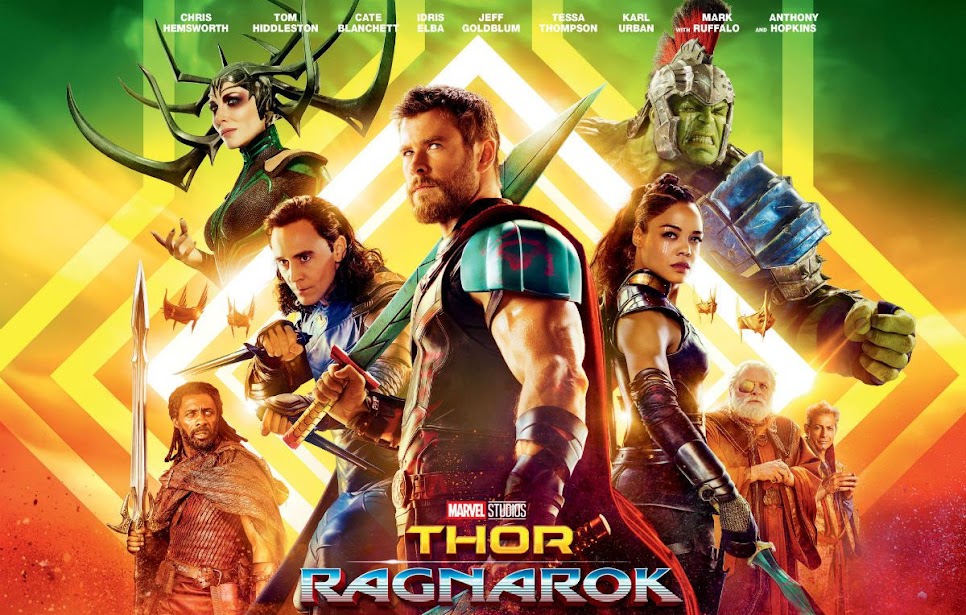 Since the two Guardian‘s movies made a pile of cash, every Marvel movie now has to look and sound like Guardians; hence the third instalment of Thor is a gargantuan smash-bash-and-crash sci-fi comedy that ditches the mythic sweep of Dark World in favour of waspish one-liners a la Big Bang Theory in an early franchise reboot. Droll Kiwi actor-director Taika Waititi (What We Do in the Shadows, ‘Wilderpeople, Moana) is a fine choice if this flavour of comic-book action floats your spaceship. Hip, flip and glib, The Dark Knight this ain’t.

Ragnarok is Marvel’s usual triumph of production design and massive CGI action set-pieces in which the plot doesn’t really make any sense but doesn’t matter anyway. It’s just a vehecle to get Thor and crew from one set-piece to antother by way of a barely connected set of comedy sketches.

Tonally Thor is now indistinguishable from Guardians; close your eyes during Thor’s two-handers with Hulk (Peter Quill and Drax) or Thor with Valkyrie (Peter Quill with Gamorah), or Thor with the villains (Peter Quill with anyone else) and you’ll think you’re watching Guardians Volume Three already. Add plenty of ray-guns, spaceships, exploding planets and it doesn’t matter that we also have Viking zombies, it’s all much the same. Except when Waititi himself voices droll rock-alien gladiator Korg; add in a laconic, mumbly, almost surreal performance from Jeff Goldblum and you really do think you’ve landed in some Marvel alternate universe.

While we lose Anthony Hopkins’ elderly Odin, Kate Blanchett delivers a coolly retrained ice-queen performance as Hele, the returning goddess of death. So much more effective than her pantomime Soviet villain in Indiana Jones, Blanchett shows Theron and Blunt how the Huntsman villainesses should have worked and brings back a sense of danger to the whole silly procession.

While still under-used Idris Elba’s Heimdal leads the Asgard resistance, elsewhere it’s all change as Hele wipes out all of Thor’s posse. In comes Karl Urban (Dredd, Star Trek) as comic sidekick Scourge, a low-IQ Asgardian bouncer. Valkyrie makes an appearance in the lively but unconvincing shape of Tessa Thompson, as far from the tall blonde Scandi warrioress as you can get; just to prove that pointless casting white-washes also seem to work to some bizarre quota system in the other direction. Benedict Cumberbatch pitches up in a marketing-driven, comedy-cameo as Doctor Strange.

At the centre of things, Chris Hemsworth shows deft comic timing to match Tom Hiddleston’s Loki, and
Mark Ruffalo turns in a whining, Woody Allen performance as Bruce Banner, for no other reason than comic effect. The three of them appear to be having a whale of a time throwing one-liners at each other under Waititi’s subversive rule, which isn’t to say we’re having as much fun as the performers.

Ragnarok may be true big-screen blockbuster popcorn fodder and is no worse for that; I just can’t help thinking it’s lost something distincitve along the way. RC