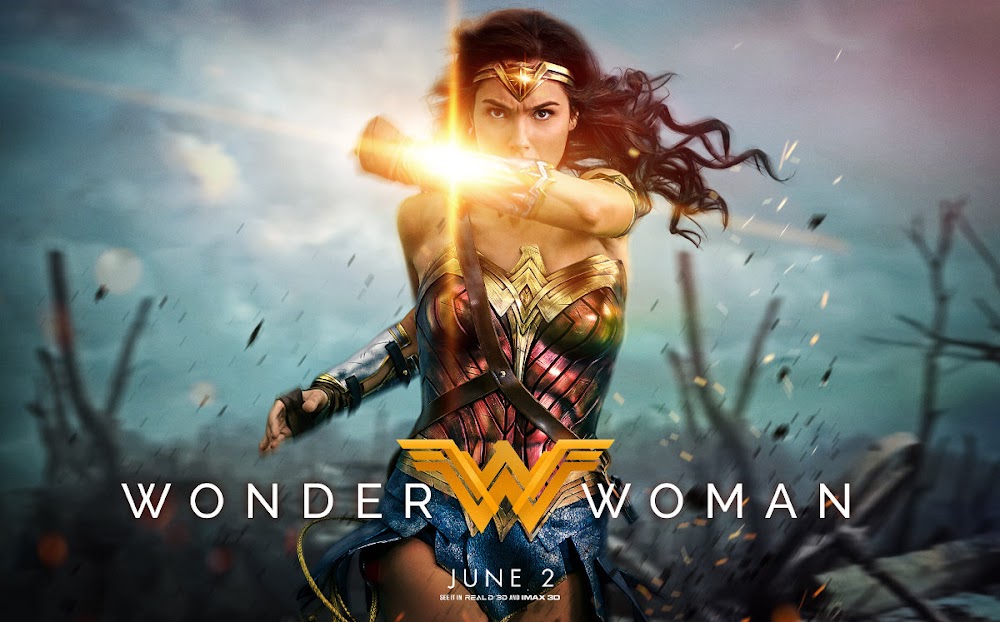 One question remains, though; if Wonder Woman is such a feminist icon, why is she still dressed in a leather-bondage-showgirl outfit?

I know, that’s the roots of the comic-book character, cast in pre-teen and middle-aged male fantasies, 1940’s pin-ups, and ‘what about that cat-suit Johanssen is wearing in Ghost in the Shell…’; blah, and indeed blah. Let’s just forget the post- neo- whatever-feminist argument and ask; as a comic-book adaptation, is it any good?

Yes, if you can accept a movie that wants to have it’s cake, etc. As an origins story, Zack Snyder (300) and co have written a decent yarn, stepping from the Amazons CGI Magic Island (more than a bit Lord of the Rings meets Spartacus) into the horrors of World War One, where Diana, Princess of the Amazons gets to question the insanity of the Great War, a male dominated world, and the repugnance of all the senseless killing, brutality and suffering. Whilst dispatching large numbers of German soldiers with extreme prejudice. Dressed in said leather-bondage-showgirl outfit.

It’s a comic-book movie; it’s a Zack Snyder comic-book movie; so we get lots of shots of Diana and the Amazons doing 300-style, Crouching Tiger, slow-motion aerial hacking and slashing. And they are very good at it in the smaller set-pieces. On the larger scale, the usual CGI mayhem kicks in, with the animated character replacements, big explosions, bigger explosions; even bigger explosions, leaping, flying, swirly light-shows and all the other trademarks of a blockbuster. Stylish, but no merit marks.

So Wonder Woman rises or falls on the bits in between.

Chris Pine does his Star Trek action hero as American intelligence officer Steve Trevor and has a Grant-Hepburn jousting thing going on with our heroine. Lucy Davis piles on the pounds to play the jolly, round comedy sidekick. The rag-tag band of misfits assembled for the not-at-all cliched behind-the-lines mission includes a Turk, a Native American and a PTSD-afflicted Scottish sniper who can no longer shoot.

Which brings us to the woman of wonder herself, Gal Gadot, who became the main draw of the otherwise tedious Batman-Superman bore-fest. The ‘undertalented Israeli stick-insect’ (my quote) holds the screen as you’d expect of a super-model, and, yes, as a former Israeli combat instructor, knows which end of the sword to hold. Unfortunately, next to the proper actors Robin Wright, Connie Neilsen, Danny Huston and David Thewlis, she comes up light. Yes, Gadot can pose (a LOT), run, jump, look serious, verge on tears and shout without going all squeaky, but it’s an awful lot of weight to carry. In obvious comparison with Charlize Theron, Jennifer Lawrence, Scarlett Johanssen or Angelina… even Halle Berry’s dismal Catwoman had Halle Berry.

So while Patty, Gal, Robin and Connie take the plaudits for the first feminist super-hero (conveniently skipping over all of the above, plus Lynda Carter’s luminous 1970’s TV creation), lets not declare this a high water-mark of comic-book movies just yet. RC